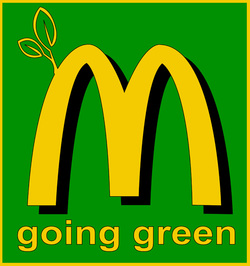 McDonalds claims that they try to consider the environment in everything that they do, including the use of the “Three R’s” (reduce, reuse, and recycle). They claim to encourage other companies, suppliers and customers to be environmentally friendly. However, some people say that troubles have been caused in the past by McDonalds, including the destruction of rainforest areas to create cattle farms. Despite this, McDonalds have recently changed all packaging to be more environmentally friendly, biodegradable plastics are now used in containers, and paper and cardboard bags and boxes are now made from recycled paper, thus making McDonalds more environmentally sustainable. They have also minimised the use of toxic chemicals by choosing suppliers who use only natural pesticides on crops. McDonalds also have offered support to initiatives such as “Clean up Australia Day” and ‘Earth Hour”. Also, McDonalds have participated in Sydney Water’s “Every Drop Counts” campaign and 194 restaurants in the catchment area are registered with the program. In the UK in 2008, 11 restaurants took part in an experiment to manage waste. Their waste was collected and treated it at an Energy Recovery Facility, which took the power from it and used it to help heat and light Sheffield City Hall and Weston Park Hospital. McDonalds said that the experiment had cut the carbon impact caused by waste disposal of the area by 54%. These 11 restaurants continue to run the scheme. McDonalds is continuing to reduce their environmental impact in other ways such as using renewable energy, or improving packaging materials. McDonalds is also trying to use the fats and oils from the cooking process to power their trucks. The company is working with a Dubai-based company in order to convert their frying oil into biodiesel. McDonalds already uses biodiesel on delivery vehicles however this is the first company to do this is the Middle East. McDonalds wants to use the converted biodiesel to power all of their delivery trucks in the area.